Inside the castle of Lëkurës

Marina at the center of the city

Marina at the center of the city

Orthodox church in the promenade

Sidewalk of the promenade

Saranda is coming from the name of the Byzantine monastery of the Agioi Saranda, meaning the "Forty Saints" and honoring the Forty Martyrs of Sebaste. Under Turkish rule, this became Aya Sarandi and then Sarandoz. Owing to Venetian influence in the region, it often appeared under its Italian name Santi Quaranta on Western maps. This usage continued even after the establishment of the Principality of Albania, owing to the first Italian occupation of the region. During the second occupation in World War II, Benito Mussolini changed the name to Porto Edda, in honor of his eldest daughter. Following the restoration of Albanian independence, the city employed its Albanian name Saranda.

In antiquity the city was known by the ancient Greek name of Onchesmos or Anchiasmos and was inhabited by the Greek tribe of the Chaonians. Onchesmos flourished as the port of the Chaonian capital Phoenice (modern-day Finiq).

The city was probably raided by the Ostrogoths in 551 AD, while during this period it became also the target of piratic raids by Gothic ships. In a medieval chronicle of 1191 the settlement appears to be adandonded, while its former medieval name (Anchiasmos) isn't mentioned any more. From that year, the toponym borrows the name of the nearby Orthodox basilica church of Agioi Saranta, erected in the 6th century, ca. 1 km (0.6 mi) southeast of the modern town.

In 1878, a Greek rebellion broke out, with revolutionaries taking control of Sarandë and Delvinë. This was suppressed by the Ottoman troops, who burned twenty villages in the region.

The town was included in the newly formed Albanian state in 1913 under the terms of the Protocol of Florence.

It was occupied twice by Greece in 1913 and from 1914 to 1916, the second time by Greek insurgents from the Autonomous Republic of Northern Epirus. In May 1914, negotiations were started in Sarande between representative of the provisional government of Northern Epirus and that of Albania which continued in nearby Corfu and ended up with the recognition of the Northern Epirote autonomy inside the newly established Albanian state.

It was then occupied by Italy between 1916 and 1920 as part of the Italian Protectorate on southern Albania. Sarandë was again occupied by Italian forces in 1939 and was a strategic port during the Italian invasion of Greece. During this occupation, it was called "Porto Edda" in honor of the eldest daughter of Benito Mussolini.

During the Greco-Italian War, the city came under the control of the advancing Greek forces, on 6 December 1940. The capture of this strategic port further accelerated the Greek penetration to the north. As a result of the German invasion in Greece in April 1941, the town returned to Italian control. On October 9, 1944 the town was captured by a group of British commandos under Brigadier Tom Churchill and local partisans of LANÇ under Islam Radovicka. The involvement of the British troops was considered problematic by LANÇ as they considered that they would use the town as their base and install their allies from Greece in the area as British documents indicate that EDES forces also joined the operation. However, the British troops soon withdrew from the region, leaving the region to the Albanian communist forces.

Given its coastal access and Mediterranean climate, Sarandë has become an important tourist attraction since the fall of communism in Albania. Saranda as well as the rest of the Albanian Riviera, according to The Guardian, "is set to become the new 'undiscovered gem' of the overcrowded Med". Tourism is thus the major economic resource, while other resources include services, fisheries and construction. Since 2012, the Port of Saranda is undergoing an expansion to accommodate cruise ships at its terminal. 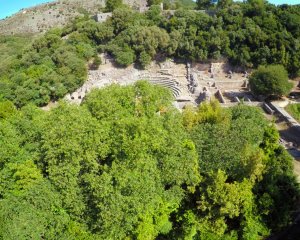 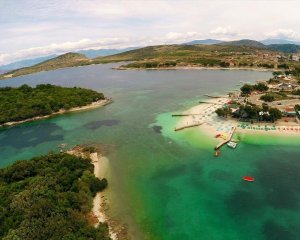 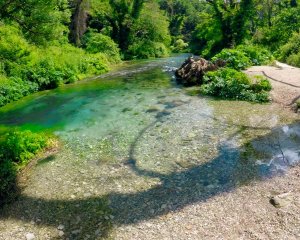 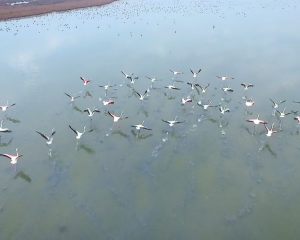